The Toronto-Ottawa-Montreal triangle is Canada’s most densely populated region. Travelling between these thriving economic centres isn’t as easy as it should be, a major obstacle to the region’s growth and competitiveness.

Better passenger rail service could be a big part of the solution. The current service, offered by VIA Rail, is often delayed and not as fast as it could be. That’s because passenger and freight trains share the same line. Freight trains are prioritized, which makes it difficult to run passenger trains with speed and reliability. It doesn’t have to be this way. 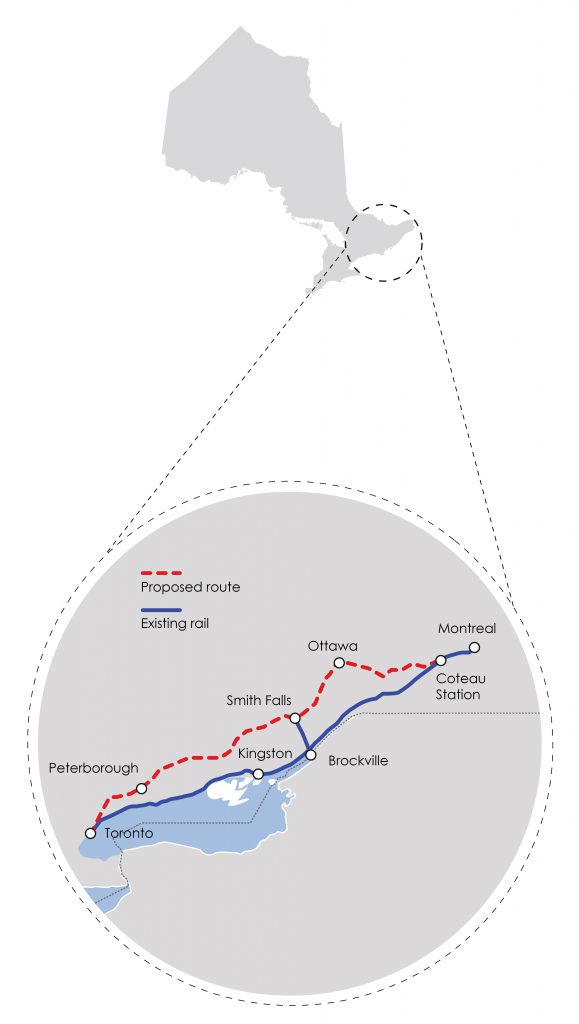 Fast, frequent and reliable passenger service, known as High- Frequency Rail to many, would address this operational challenge by creating new, dedicated tracks for passenger trains from Toronto to Coteau, Quebec, at which point they would then reconnect with track already owned by VIA Rail. These would by-pass the current shared tracks and improve regional connectivity by adding new stations in eastern Ontario, including Peterborough.

Dedicated tracks would allow VIA Rail to improve its train frequencies, speeds and schedules, and would increase on-time service, a measure of reliability, by over 35%. Travel times between Ottawa and Toronto would fall by more than an hour. That’s a big jump. It would make the train more competitive with car travel, reducing congestion in and around Toronto, Montreal and Ottawa.

Fast, reliable passenger services will unlock the economic benefits of improved connectivity between three of Canada’s most dynamic economic engines. The project would also extend the commutable distance to metropolitan areas, which increases access to more affordable home ownership along the route. As the pandemic has shown, many families are reconsidering whether downtown city living is right for them, or whether they could live outside the city and commute when necessary. This project would increase those choices across eastern Ontario. The more choices people have, the more competitive Ontario becomes.

VIA Rail is an independent Crown corporation of the Government of Canada, but the Province can play a key role in enabling this project through streamlining approvals. Increased frequency, speed and reliability will transform how people see inter-city rail service in eastern Ontario. Ottawa & Eastern Ontario Peterborough Kingston

Increased frequency of service could reduce travel times from Ottawa to Toronto by as much as 1 hour and 15 minutes
Increased revenue and ridership as a result of hourly frequencies
Construction of dedicated tracks and enabling infrastructure would create approximately 50,000 person-years of work, according to VIA Rail
According to VIA Rail, the project “would extend the commutable distance to metropolitan areas allowing greater access to home ownership ‘out of town’ while maintaining employment in cities”
Reduce travel times by 25%
Improve on-time performance to over 95% from current 70%
Get Informed