Ontario is already making significant investments in highway infrastructure in the eastern GTA, such as the recent extension to Highway 407 East. Connectivity through transit must be next.

The population in the GTA over the next two to three decades is expected to become what is the metropolis of New York today. We need to be thinking about this growth when making planning decisions. People and neighborhoods will require multimodal transit connectivity to ease the dependency on cars for those who want to use transit.

A number of important transit projects are in the planning stages. The proposed 36-kilometre long Durham- Scarborough Bus Rapid Transit (BRT) project would enhance connectivity between Toronto and Durham Region, linking together regionally significant economic centres like the University of Toronto Scarborough Campus, downtown Pickering, Ajax, Whitby and Oshawa. In a similar way, the proposed 407 Transitway would create a new inter-regional transit route along its own rightof- way, connecting Burlington to Highway 35/115 in Clarington. Bus rapid transit would be the most flexible way to implement the 407 Transitway swiftly, but as ridership increases the route could be converted to light rail transit in the future. 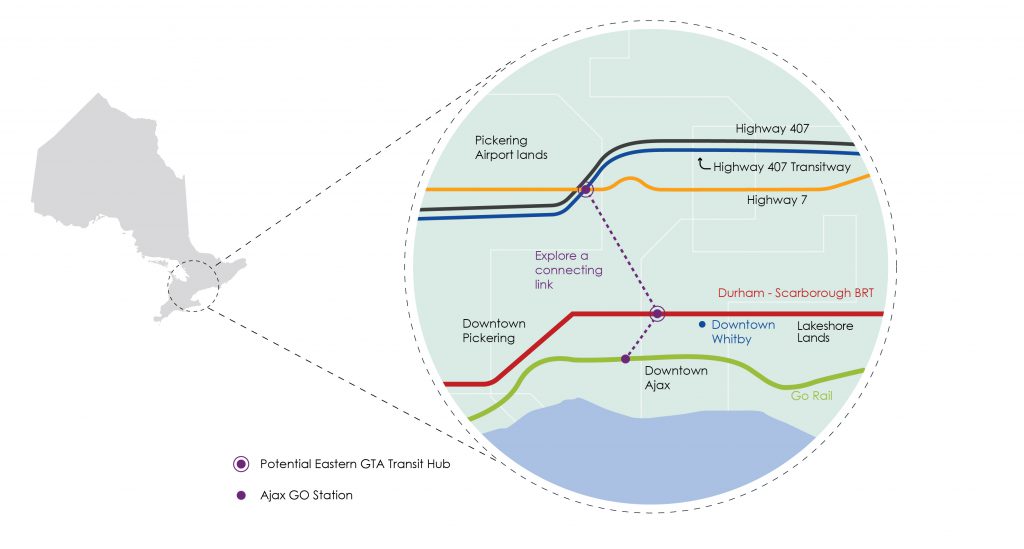 While these projects are still in the planning stages and routes need to be validated and finalized, the Province should try to tie them together with other modes of transit and transportation using a new multimodal Eastern GTA Transit Hub, similar to the proposed Pearson Transit Hub and “Union Station North” created by extending the Yonge Subway into York Region.

The lakeshore lands or the lands zoned for a potential Pickering airport are ideal locations for an Eastern GTA Transit Hub. Transit will become increasingly important given that the Durham corridor is expected to accommodate 210,000 new residents and 66,000 more jobs by 2041. While the Government of Canada will evaluate the need for a new airport, the Pickering airport lands could in the interim play an integral role in providing transit connectivity to the eastern GTA, as well as providing access to the potential future airport. As a possible alternative site, on the other hand, the lakeshore lands are closer to GO Transit and VIA Rail. Or, to create an interconnected matrix system of transit across the GTA, why not create both? Bus transit could then provide access between them until ridership is high enough to justify rail like the UP Express.

Done right, an Eastern GTA Transit Hub with rapid transit connections to the 407 Transitway and Scarborough-Durham BRT, and the potential to connect riders to GO Transit, could service a new eastern GTA airport. Regardless of the Government of Canada’s decision on an airport, the eastern GTA is growing and the communities will require more reliable transit and connectivity. These investments in an Eastern GTA Transit Hub have the right ingredients to enhance housing development and economic competitiveness with provincewide benefits.

$686 million in economic benefits including travel time savings, reliability, safety, and congestion and emissions reductions due to the Durham- Scarborough BRT
208 fewer traffic related injuries or deaths as a result of the Durham- Scarborough BRT
Highway 407 Transitway would provide high-quality transit across numerous GTA communities
Get Informed